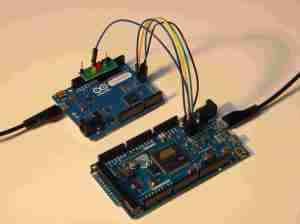 Flashing new firmware into the Due’s atmega16u2, using a Leonardo as ISP.

The arduino ide comes with the sources for the 16u2’s firmware. It links against  LUFA  (Lightweight USB framework for AVR’s) which you need to download first. Look for version 100807, not the latest one: the 16u2 firmware from the current ide (1.5.2) does not build as is with the latest version of LUFA. Unzip the zip file in any location on your PC.

There is a tutorial on how to flash new firmware in the atmega16u2 on the Due here. However, the wiring used over there uses pins 10, 11, 12 and 13 on the Arduino that serves as programmer. That does not work on the Leonardo. With the info from my first post, it is straightforward to do this task with a Leonardo too. So following diagram does not bring world shocking new information, but I posted it anyway as I found it practical. Pay attention to the orientation of the Due: its isp header is “upside down” as compared to the SPI header.

This wiring works on classic Arduino’s like the Uno or Duemilanove too. I find this one easier to remember and to wire.

The procedure in the official tutorial can be used as is with the Leonardo. Except that there is no need to disable autoreset. The procedure is stable, there is not a lot that can go wrong. And if it fails you can try again. Nevertheless I recommend to first try to download the current firmware from the device, just to verify you have a working isp (e.g. for linux, from the ide’s tools dir):
./avrdude -C avrdude.conf -c arduino -P /dev/ttyACM0 -b 19200 -p m16u2 -vvv -U flash:r:old.hex:i

I also recommend to install the three leds. If the sketch hangs somewhere (which happens rarely though), you see immedeately what happened.

I did not connect the 5V pins. Both boards are powered by usb. You can compile a new firmware and after upload, the Leo drives nRESET high and the Due is immedeately ready for action again.